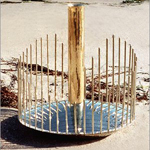 Is there anyone who does not know the Xylophone?

It is played in African areas as well in various South American and Asian countries. Each culture has its own look and sound. In the German-speaking regions the Xylophone was known by the name of Straw Fiddle or Wooden Laughter during the Middle Ages.

Carl Orff revived this ancient instrument around 1910 to be used in his “school works.” A simple but multifarious instrument. Suitable for children, with or without musical knowledge.

The difference in sound depends not on the wood but mostly on the resonating chamber underneath; the sound of wooden plates does not last long compared to that ofmetal plates. Therefore it is very important to give the sound due space. In the case of the Xylophone is it a larger resonating box under the sound plates.

The Auris models consist of pine wood panels that can easily be put together. The heavy sound plates from Acacia wood rest on them loosely and can be changed. The sound is strong and clear.