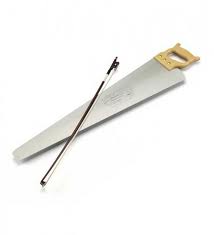 At the beginning of the 20th century, blacksmiths did not have any way to test the degree of steel's hardness when it had been in the fire. What he did was to strike the steel with a hammer. When it produced a particular long lasting tone, the hardness was deemed correct. Carl Feldmann was a creative cutler in Remscheid, Germany, who wanted to experiment with different types of steel. He then took high quality steel and tried passing a bow over the back of the metal saw. Later on, he determined the ideal conical form to create several scales. The result of his experiments was the singing saw, named after him as we know it today.