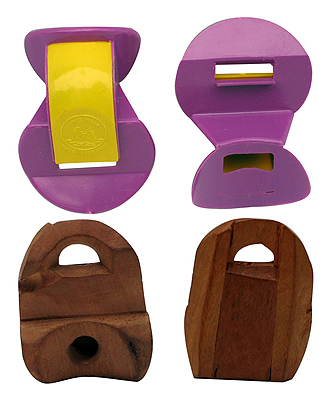 Believe it or not, this flute is blown with the nose! Place the opening at the thicker end of the flute against the nostrils; the open mouth is placed around the other hole. The flute has to be pressed against nose and lips. Then blow gently through the nose. The mouth creates a resonating chamber where the sound is formed, and which can be varied by moving the cheeks and tongue. You can thus create funny sounds and even simple melodies. Early verions can be found in the islands of Polynesia, where they are actually flutes, as well as Southeast Asia and Africa.