You are here: Home » Strings » Oud 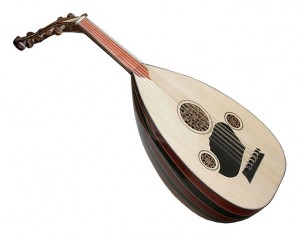 The Oud is an ancient pear-shaped stringed instrument commonly used in Greek, Byzantine, North African and Middle Eastern music. Construction of the oud is similar to that of the lute. The modern oud and the European lute both descend from a common ancestor via diverging paths but is readily distinguished by its lack of frets and smaller neck. The Oud is considered an ancestor of the guitar.