You are here: Home » Strings » Sarod 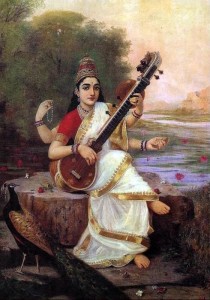 There are many theories surrounding the origin of this instrument.  One is that it was adapted from an Afghan rabab after an Afghan musician came to India in the 18th century and became the court musician of a king.  Another is that it is the combination of a veena, rubab, and a sursinger.  In either case, the first appearance of the sarod is approximately 1820, and it received finishing touches from Allauddin Khan, the guru of Ravi Shankar, in the early 20th century.  Generally, it has between 17 and 25 strings – 4 or 5 main strings, and the rest sympathetic.  It is a strummed and plucked instrument, and because of the lack of frets, the strings must be pressed down hard when playing chords and notes.  One popular technique is to do this using the fingernail.