You are here: Home » Strings » Swardmandal 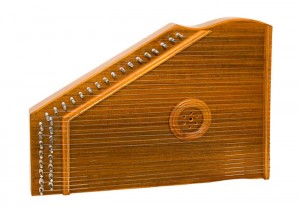 The swarmandal or Indian harp is an Indian zither that is today most commonly used as an accompanying instrument for vocal Hindustani classical music of North India, Pakistan, and Bangladesh. The name combines swara (notes) and mandal (group), representing its ability to produce a large number of notes; it is also known popularly as Sur-mandal. It is similar to an instrument from Iran and has been used for many generations dating back to the Mughal era. The swarmandal is similar to the autoharp or zither in many respects.