You are here: Home » Drums » Bendir 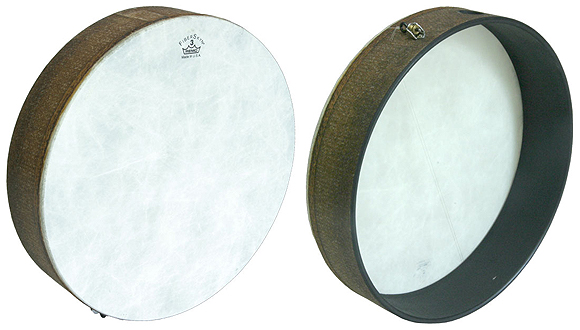 The bendir (also known as erbeni or arbani) is a simple traditional frame drum used throughout northern Africa. Frame drums are the oldest and most common kind of drum and the bendir has been around since prehistoric times with strong evidence of its use in Ancient Egypt and Mesopotamia. It typically has a two or three strand snare (usually made of fine gut and seen faintly in the image on the right) stretched across the inside of its head which, when the drum is struck with the fingers or palm, gives the tone a unique buzzing quality. The bendir has a wooden frame, which is usually between 36 to 41 cm (14 to 16 inches) in diameter, with a membrane that is glued and/or tacked to the frame. Traditionally the bendir is played vertically by inserting the thumb of one hand into a special hole in the frame. It is then played using the fingers of the that hand and with the other hand moving freely across the face of the drum. Other methods of playing are on the lap and face up wedged between the knees. The bendir is used in the special ceremonies of Sufism which has a strong tradition of using music, rhythm, and dance to reach particular states of consciousness.