You are here: Home » Drums » Bodhran 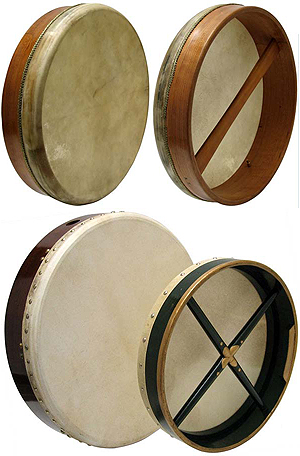 The bodhran is an Irish frame drum. The wooden frame is covered with goat skin and usually strengthened with a cross in the centre. Modern bodhrans offer a mechanical tuning system which helps the player either to create a low bass sound or a higher sound. Usually the bodhran is played in a sitting position and held upright on the knees of the player. With the right hand the bodhran is played with a wooden striker, wbich is called a cipin or tipper. With the left hand one touches the inside of the skin and changes the height of the tone by slight pressure and different hand positions. To use the stick needs a lot of practice as the technique is quite unique and sophisticated: the stick whirls over the skin very fast. There is definitive evidence that the bodhran was used as a battle drum in the 17th century, and researchers claim that it predates the arrival of Christianity in Ireland.