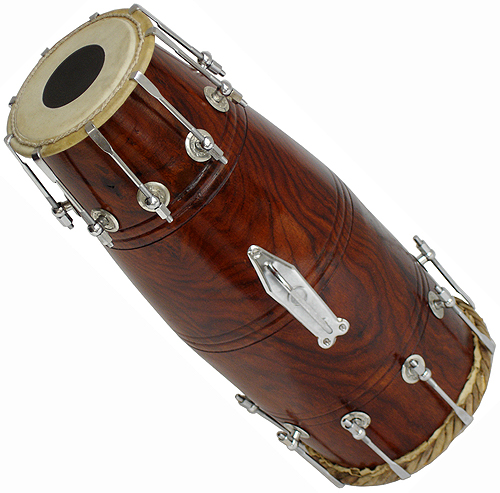 The naal (also known as Dholki) is a drum that is very popular with the tamasha tradition (a folk art form which includes singing and dancing) of Maharashtra state in western India. The naal has a barrel shaped body and the left side resembles the bayan (the large metal drum of the tabla) except that it uses dholak masala (an oil based application) on the inner surface instead of a syahl (permanent black spot). The right head is unique in its construction. Goat-skin is stitched onto an iron ring and in the centre of this skin is a syahi, similar to tabla except much thinner. Traditional naal are laced with rope and sticks are used to tension the drum heads but today it is more common that naal are made with metal turnbuckles that allow more precise tuning. There is often some confusion concerning the term 'dholki' which literally means 'small dholak'. Dholki is often used for smaller dholak that, structurally speaking, are quite different to the naal.