You are here: Home » Drums » Kanjira 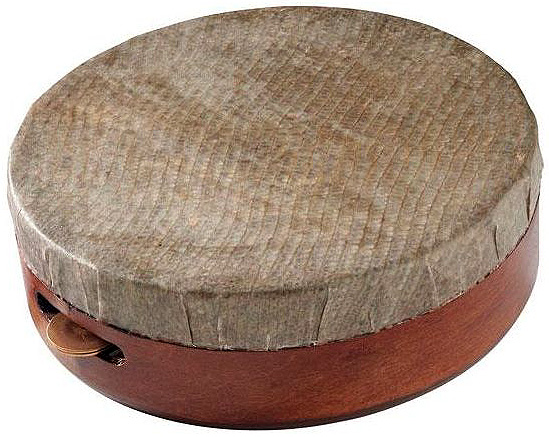 The kanjira (also known as a ganjira) is a South Indian frame drum – a percussion instrument of the tambourine family. It is used primarily in concerts of Carnatic music (South Indian classical music) as a supporting instrument for the mridanga. Having been used for less than a century, the kanjira is considered to be a comparatively recent innovation. It has been used in Indian classical concerts since the 1930s. Similar to the western tambourine, the kanjira consists of a circular frame made of the wood of the jackfruit tree, between 18 and 23 cm in width and between 5 to 10 cm in depth. The frame is covered on one side with a drum head made of monitor lizard skin while the other side is left open. The frame has a single slit which contain two to three small metal discs that jingle when the kanjira is played. It is normally played with the palm and fingers of the right hand, while the left hand supports the drum. The fingertips of the left hand can be used to bend the pitch by applying pressure near the outer rim. Generally the kanjira has a very high pitched sound and, unlike the mridanga or the ghatam, is not tuned to any particular pitch. To get a good bass sound, the performer reduces the tension of the drumhead by sprinkling water on the inside of the instrument.