You are here: Home » Drums » Taiko 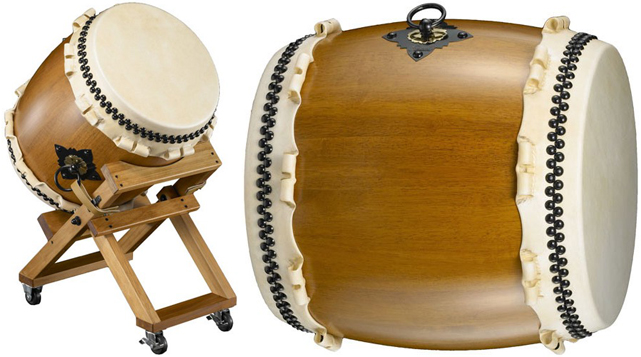 Japanese taiko drums (taiko in modern times is a general term for 'drum' but historically taiko meant 'great' or 'wide drum' in Japanese) have been developed into a wide range of percussion instruments that are used in both Japanese folk and classical musical traditions. Taiko drumming has been part of Japanese culture for many centuries and taiko drums can be found in the numerous temples and shrines throughout Japan where they are played in religious festivals and ceremonies. Taiko were also used in warfare to bolster the spirits of the warriors and to demoralise the enemy.

Taiko are generally stick percussion instruments (although some taiko are played using just the hands) that have heads on both sides of the drum body and a sealed resonating cavity. They are characterised by a high amount of tension on the drums heads with a correspondingly high pitch relative to body size. Since the later part of the twentieth century, Taiko drumming has become a performance art in itself that includes physically demanding and dramatic drumming combined with dance and often humour.