You are here: Home » Drums » Pandariq

The pandariq, or riq (also spelt riqq or rik) is a type of tambourine that is common to Arabic music and is an important percussion instrument in both folk and classical music. Traditionally the riq has a wooden frame, metal jingles (small cymbals), and a thin head made of fish or goat skin. These days riq frames are also made from metal or synthetic materials and the heads are also often synthetic. The riq, which descended from the Persian daf, typically measures between 20 and 25 cm in diameter. Riq frames are often decorated on both sides with inlay such as mother-of-pearl, ivory or decorative woods. Generally a riq has ten small cymbals (about 4 cm in diameter), mounted in five pairs. The skin head is glued on and tightened over the frame which is about 6 cm deep. The riq is played in music ensembles throughout the Middle East, where it has a particularly clearcut role that goes beyond the simple rhythmic requirements of the daf,tar, or mazhar. . In Sudan and upper Egypt the riq is also related to worship. 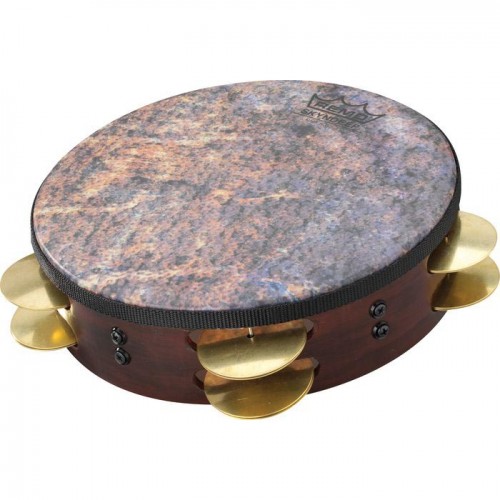