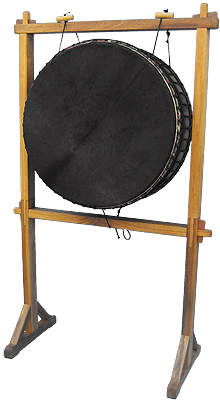 A gong drum (also known as 'gong bass drum') is a percussion instrument that has a large single or double sided drumhead in order to create a powerful, resonant sound when struck. The head can be tuned as loose as possible to avoid any sense of pitch in the sound, or tensioned more tightly to produce tympani-like tones. Gong drums vary in size from about 50 cm (20 inches) to enormous sizes. First produced in the late 1970s, gong drums have since been used by a wide variety of musicians and recording artists and also in movie sound tracks. Gong drums are typically suspended in frames made from various materials such as wood, metal and aluminium which sometimes have casters for ease of movement in situations such as stages or recording studios.